Conscious Eating – Who’s Responsibility Is It? According to the WHO…

King Curtis, the child personality from the YouTube video, may think “Bacon is good for you!”, but not according to the World Health Organization (WHO).

The WHO says bacon, sausages and ham are among the most carcinogenic substances along with cigarettes, alcohol, asbestos and arsenic, according to the October 25 health report news in theguardian.com. Additionally it was reported that the WHO’s International Agency for Research on Cancer indicated there was enough evidence to rank processed meat as a group 1 carcinogens because of a causal link with bowel cancer.

And so the uproar begins amongst the meat enthusiasts and vested industries. Many would prefer to not hear such health facts about the impact of our human food consumption behaviors. Ignorance is bliss – right?

Not necessarily. When you add up all the statistics, such as those recently reported on newswire.net, the International Cancer Research Agency, found that 50-gram (1.8 ounce) portion of processed meat consumed daily increased the risk of colorectal cancer by 18%.

Now that you know the power a couple of breakfast sausages can have on your body and its health, it may cause your to think twice. Especially when you consider the compounding effects from years of misaligned food consumption patterns.  After adding up the pollutants that we pump into our bodies from the dawn of childhood up and through adulthood, we’re just begging our body to say “Show me the DISEASE (money)!” You might as well say “show me the money” because our behaviors always cost us in the short…. or the long run.

In the short run poor eating habits can have incredible implications on our children’s and our own mental clarity, resiliency and emotional stability – which consequently can cause countless other ill-fated side effects such as low self esteem, self-worth, behavioral outbursts, etc.

Everyone has the free will to become polarized on the facts about harmful foods. But at the end of the day (with or without an organization making a declarative statement about a food) you’ll be faced with the glaring reality and consequences of misalignment. By using common sense, discrimination and maintaining responsibility for what you put into your body, it will be nearly impossible to be lead in the wrong direction. And if you’re not sure, your body will tell you by how it feels as a result of your eating behaviors.

We’ve lulled ourselves into thinking, feeling and existing on far lower levels than our bodies were designed to operate. It IS normal for our bodies to feel great, energetic, mentally sharp, happy, be at an ideal weight and full of vibrancy! If you feel anything different, your body is already giving you glaring signs and signals that you’re going in the wrong direction. Are you listening? Are you teaching your children to listen and course correct? Our machine is flawless…if you treat it with the respect it deserves, it will perform and function beautifully for you for a very long time.

So, before getting emotionally charged about the meat (or any other) issue, take a step back. Put on the hat of “Reason” and allow the wisest part of you to be in charge. Then ask yourself a few honest questions like,  “Is this truly good for me and other people, or just good for my taste buds, business account, or whatever the case may be?”  Go a step further by requesting and insisting that you only want unprocessed, non-GMO and organic foods at stores and restaurants.

You can also take responsibility for reading food labels on packages. Study harmful ingredients like nitrites, sodium benzoate and the 100 other different names for MSG (monosodium glutamate) – not to get fear based, but to inform your decisions. Are any of these in the products that you or others eat? Are they a benefit to the body and clarity of the mind?Eating healthy may take effort for you and your children, but so does feeling crummy, dealing with emotional mood swings, tantrums and signing up for the plethora of peddled pharmaceuticals – and the deluge of associated ill-health affects that come as a result of taking many of these substances.

A food or substance is either life affirming… or its not. There is no other option. The choice lies where it always has…in our own hands. 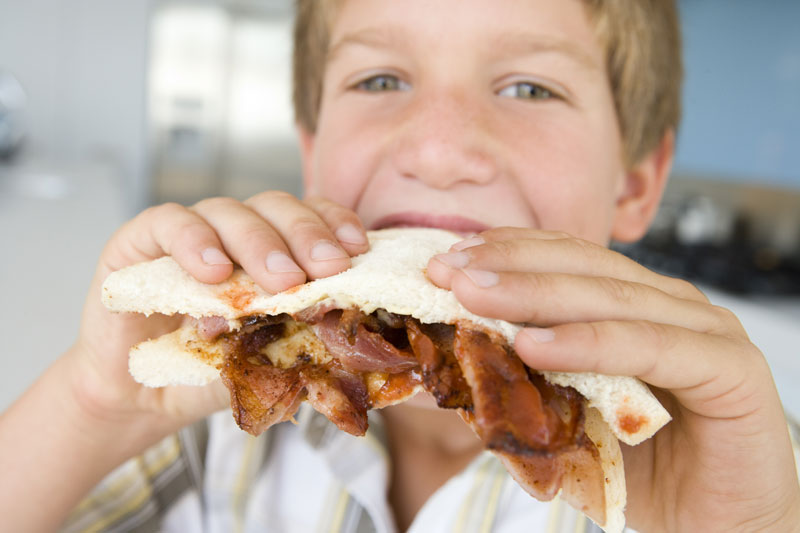